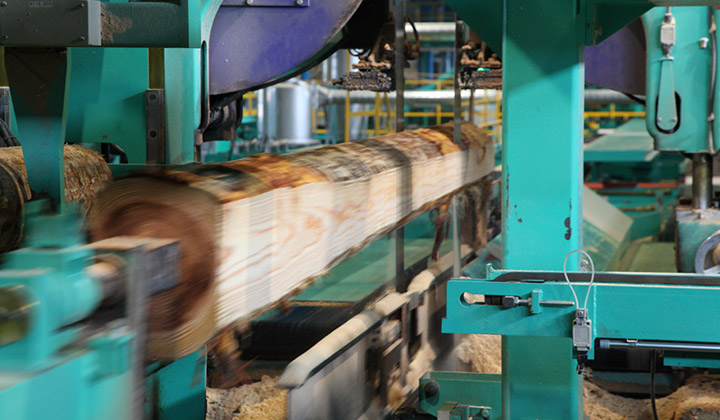 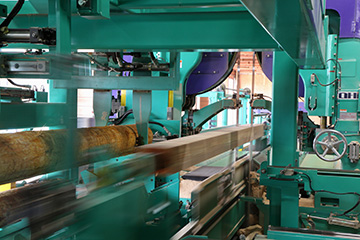 Frozen log in Hokkaido is also being sawed lumber at high speed.

In recent years, as the demand for larger and faster lumber mills has increased, on the other hand, the increasing burden on band saw engineers due to a lack of successors has become a problem.

We have developed a new band saw lumbering system "NTB system" that speeds up lumber, reduces maintenance load on the band saw, and stabilizes performance. We aim to provide a system that allows users, band saw processors, and us to continue sharing the value of band saw lumber.

1 【New idea band saw】 for newly developed NTB band saw,         ROLL TENSIONING and PROCESSING ON THE  BACK are no required! 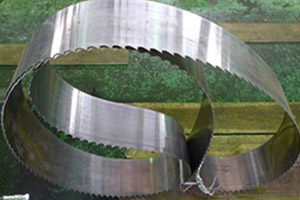 Conventionally, saw blade requires roll tensioning and processing on the back to fit saw wheel during manufacturing by skilled mechanic. also he needs to provide the  maintenance work during use.

Our NTB band saw is designed to have a  processing on back evenly by simple grinding and joining the curved material custom-ordered to a special steel maker into an arch shape in our factory. this technology is already patented.

in addition, during manufacturing we only apply special treatment on the blade which suppresses warping of saw blade instead of applying roll tensioning.

we have succeeded in developing a band saw, which is extremely unlikely to be deformed during use and whose performance does not vary from one band saw to another. 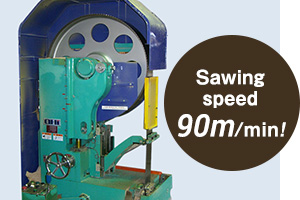 The NTB system facilitates faster sawmilling speeds and improves sawmill production. For example, if a single 3m lumber runs four times at a sawmilling rate of 35 m/min and the cycle time is 54 seconds, the cycle time will be 44 seconds if the sawmill runs at a high speed of 70 m/min, resulting in a drastic increase in output of more than 22%. ( In the running test, the saw is replaced once per shift.) In addition, by increasing the number of cuts of the head machine, we can expect to reduce the number of machines in the next process and save costs by leaving space and manpower out. Furthermore, the occurrence of saw cracks and the appearance of poorly performing saws are extremely reduced, and the production interruption time is also reduced.

In conventional band saws, plastic deformation is partially applied to adjust the waist insertion amount and back amount, so if the width of the saw blade decreases due to re-grinding, the balance will be lost and the shape will be changed. Also, there are problems such as saw cracks that are likely to occur depending on the way the waist is put in, which requires troublesome correction work for saw doctors. This technic requires long study, rich experience, good sense and is really a process where one can show his best abilities. We can say, this technic is highly depending on the personality of the saw doctor. The NTB band saw frees you from this cumbersome work, allowing the mechanic to concentrate on the finishing work, making it easier to consistently supply high-performance band saws, which enables consistent and stable lumber production.

As a supporter for sawmills, we are serious about continuing to provide improved and stable sawmill production, and are working on the development of the NTB system, and are striving to evolve it even now.

Our aim is to achieve a high level of ingenuity by the ingenuity of the three parties of lumber users, saw doctors, and our machine manufacturers, while the best matching between the band saw machine and the band saw is ensured. We believe, that productivity of the saw mill does not only depend on machine only. "Production know-how and daily maintenance of equipment" by user, "High level technic to prepare the best saw blades" by saw doctor, "Machine durability and aftersales service" from equipment manufacturer are the factors to build up a new system for high productive saw mill.